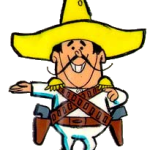 Frito Bandito got a makeover when the National Mexican-American Anti-Defamation Committee complained of the character; his gold tooth and stubble were eliminated and his hair combed. As with other characters of questionable character, he was eventually jettisoned and was no longer seen after 1971. He was replaced by the Muncha Bunch, a group of cowboys, which then were replaced by W.C. Fritos, modeled after comedian W.C. Fields.

This site uses Akismet to reduce spam. Learn how your comment data is processed.

A Mouse Gotta Eat, Ya Heard?

Oh no! You have an ad-blocker! Please support SpeedysCousin.com by adding us to your whitelist in your ad blocker. We promise our ads are unobtrusive - PLUS - you don't want to miss out on all the cool ebay collectibles! Thank you!